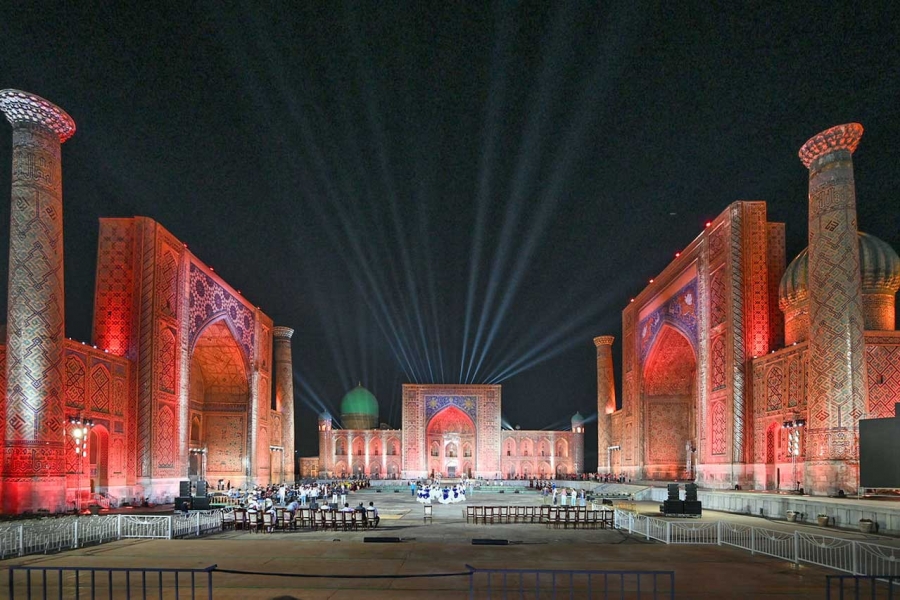 Explore the cultural treasures of Uzbekistan! Uzbekistan is the land of mosques, medressehs, monuments and minarets! In this Uzbekistan family tour you will visit everything from UNESCO World Heritage sites, magnificent forts and palaces and spectacular mountain ranges, lakes, steppe and deserts in Tashkent, Samarkand, Bukhara and Khiva. You and your travel group explore traditional bazaars, markets and villages, tag along to real neighborhoods, schools and the homes of local residents to experience the warmth of Uzbek hospitality. You will also clamber over the ruins of an ancient mud fortress in the Kizil Kum desert, ride a camel and enjoy an overnight stay in a nomadic yurt under the stars. Stop in to watch master artisans in ceramics (tiles), weaving and wood carving and find those must-have souvenirs in the myriad of workshops in the old medressehs. See the process of cooking plov (pilaf) or non (its a little different everywhere!) and learn the ritual of pouring tea here. Enjoy traditional music, joyful children dance performances, and learn to play the doira (hand drum). Learn the folk stories, superstitions and legends of Central Asia, pay homage at the statue of storyteller Hodja Nasreddin in Bukhara. Participate in community work and the celebrations and festivals. Dress up in costumes from the time of Avicenna, act with Uzbek actors or take part in a sporting event. Enjoy private peaceful sunset view in a Kizilkum desert and in legendary Khiva.

Uzbekistan family tour begins and ends in Tashkent, with 1 night in the Kizil Kum desert, a night in a Yurt Camp and one night in  Khiva, a UNESCO World Heritage site,   2 nights in Bukhara, and 3 nights in Samarkand.  Price for the private family tour is  $3, 449 per person double occupancy.  Included are  accommodations  in 4-star and boutique hotels, all domestic transportation including air, ground, and high-speed rail; transfers,  English-speaking guides throughout,  activities and entrance  fees, wine tasting and a visa invitation.  Also included are cooking classes, master classes with craftsmen,  daily breakfast, 2 lunches with local families, and dinners with ambiance.

Our guests Wendy Perrin and family enjoyed their family experience in Uzbekistan and learn https://www.wendyperrin.com/photos-from-wendys-family-trip-just-back-from-the-silk-road/

After airport procedures you will be met outside by your escort guide and will transfer to the boutique hotel located in the heart of the capital city.

This morning includes the Amir Timur Museum (dedicated to all things Tamerlane!)  and Mustakillik (Independence) Square before a Welcome lunch. Then we shall explore the ancient part of Tashkent: the Khasret Imam, Sheik Tellya Complex  and the 2000 year-old Chor-Su Bazaar and enjoy the bustle of the market.  Its a major food hall, with bakeries, fresh cheese and produce sellers, wedding sweets, dried fruits and nuts, meats of all kinds... There's the Nature museum and botanical garden, the Earthquake memorial and the Abul Kasim craft center in an old medresseh. We'll ride the metro and visit the train museum for the special tour. Enjoy the night panorama of Tashkent.

Morning flight to Urgench to drive to Ayaz Kala located in the desert of Kizil Kum. Bring you sunscreen and hats! Upon arrival we'll visit the Ayaz Kala, mgical site. Have a picnic lunch near our yurt camp or Lake. Enjoy a camel ride and dinner under the stars. The sunset is here breathtaking, a photographer's dream.

After sunrise photography and hiking we'll take a sightseeing drive to Khiva. One of the most popular UNESCO World Heritage Sites of the Silk Road, this "living museum" has a traffic-free historic core and adobe walls that change color with the daylight.

This fairy-tale city has some of the best preserved historical architecture in the Old City including the Ichan Kala: the Ata–Darvaza gates, the majestic, blue-tiled Kalta Minar tower, the Mohammad Aminkhan and Khodja Islam medressehs, the Kunya Ark (Ancient Citadel), Tash Hauli Palace (with peek into the palace's harem-quarters), the bazaar in housed in the old caravanserai (traditional inn for travelling merchants - the doorways are high enough for an elephant), and the cool, peaceful Juma mosque with its 200 beautifully carved wooden pillars. Evening in Khiva is magical with the city's minarets silhouetted against the starlit sky. Make sure to get up onto the city wall for the views and try the local dill-flavored noodles.

Scenic drive to Bukhara city through the Kizil kum desert. WE may also take a high speed train to Bukhara. Picnic on the road and explore near the Amu  Darya River Upon arrival in Bukhara you will be welcomed at the family friendly boutique hotel located in the center of ancient city.

Bukhara, once the intellectual center of the Islamic world can trace its origins to the 6th century BCE. One of Central Asia's holiest cities, behind the ancient adobe walls, the backstreets are lined with spice markets, artisan and carpet shops, and the homes of families who have lived here for generations. Enjoy sipping a green tea and watching the social life from under the shady mulberry trees surrounding the pool - the traditional heart of the city, where tea and gossip reign, artisans sell their handicrafts and at night the colored lights give a festive air to the local dance troupe. The Uzbek tea ceremony is a formal and graceful ritual, poured three times from the pot into a ceramic cup allowing the full flavor and aroma of the tea to develop. While green tea is the standard, there is a wide variety of black and herbal varieties.

This morning after the puppet show we continue on sightseeing to the Kalyan Minaret, part of the Poi-Kalyon complex which dates back to 1127, a fitting symbol of old Bukhara. When Genghis Khan invaded he left only the minaret standing as legend says that he was struck by its beauty (or that as he looked up his hat fell off, both are good stories! The city's subdued desert hues lend centuries-old buildings their own exotic air. The Fortress Ark defended its rulers and their servants over the centuries while some sixty caravanserais could be found within the city for traders and travelers. Try on traditional outfits at the national costume exhibit in the former merchant's house of Fayzullo Khodjaev. Wind your way through the city's ancient covered trade domes of the money changers, hat, and puppet sellers, as well as carpet, jewelry and embroidery merchants. Pick up your Bukhara doppi cap here or a pair of Bukhara's unique bird-shaped embroidery scissors.

We will also enjoy the Uzbek hospitality - participate in cooking with local people and enjoy a meal together.

After seeing the four, blue-domed minarets of the unique Chor Minor complex, we'll finish at the Sitorai Mohi-Khossa or Palace of Moon and Stars.

The afternoon begins the "Golden Road to Samarkand" and the comfortable high speed train whisks you there in 90 minutes. Enjoy your free time in the magnificent city.

Discover ancient  Samarkand starting at Registan Square, one of the most recognized landmarks of the ancient world and a destination for holy pilgrims from around the world. Surrounded on three sides by the majestic porticoes of its medressehs it's the site of world-class music festivals and national celebrations for Navruz, the Persian New Year in March. We'll enjoy a full day of "monumental" exploration here beginning in Registan Square, with its soaring porticoes, stunning decoration, and fabulous history. Within the old city are the remains of the 15th century observatory of the astronomer Ulugbek, and the tomb of the Prophet Daniel.

Continue sightseeing at the Shahi Zinda Ensemble, the ancient necropolis, a veritable museum of tile artistry under the open sky. A series of 11 mausoleums line a medieval street, offering a first-hand, up-close lesson in Islamic decoration, leading to the edge of what was ancient Afrosiab. Make a stop at one of the oldest craft center in Konigli village at Meros paper mill (founded by Mukhtarov brothers)where they still make  traditional mulberry paper.  Participate in papermaking master class. Meet several generations of regional craftspeople.

Sightseeing day drive to Shahrisabz (150 km.), the birthplace of Amir Temur. Visit ancient ruins at the Summer Residence "Ak-Saroy” , the remains of the towering gates,  the Mosque Khazrati Imom, and blue-tiled Kok Gumbaz. You  may enjoy the spectacular Shakhrisabz mountain hike before returning to  Samarkand.

The high speed train takes us back to Tashkent for a Farewell dinner and overnight at the Tashkent  hotel.

Early morning transfer to the airport to take your flight to New York at 7:05AM.