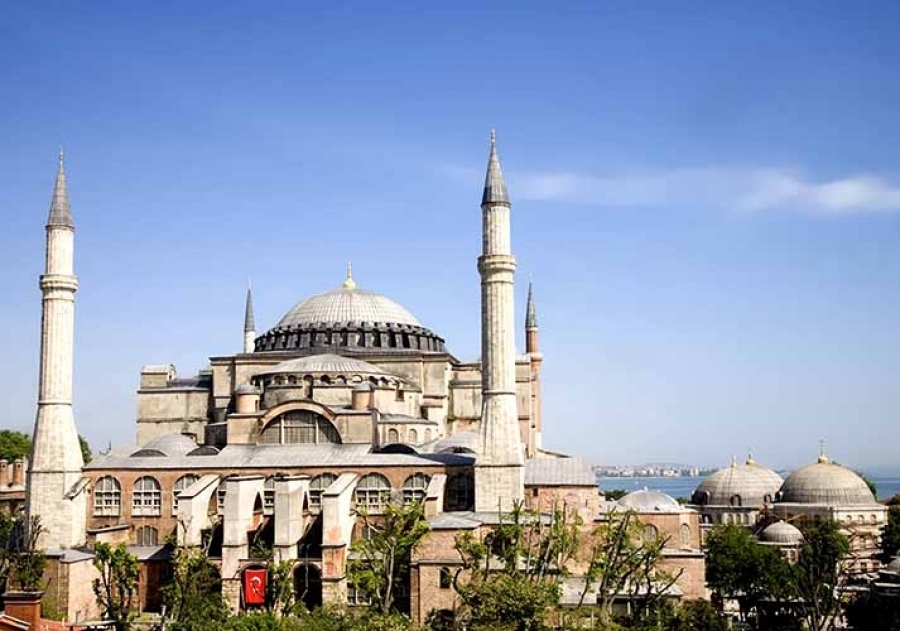 Turkey is a mosaic of East and West. No other country has been so pivotal in the history and culture of two continents for thousands of years. A hypnotic blend of standing stone monuments, rising minarets, gleaming tiles, and Byzantine gold, Turkey holds two of the Seven Wonders of the Ancient World and the world's first cathedral at St. Peter's cave. Turkey is as intricate and surprising as the beauty of its marbled papers and as magical as its dazzling monuments. Join us to delight in the treasures of Turkey!

Arrive at Ataturk International Airport in Istanbul. The tour guide will meet you and you will be transferred to your hotel for accommodation.

Istanbul was the capital of both the great Byzantine and Ottoman Empires. Sightseeing tour to the Hippodrome, Topkapi Palace, St.Sophia Church - the Hagia Sophia and its Basilica Cistern, one of the finest architectural works of art in the world, and the Blue Mosque. Explore the exciting Grand Bazaar before a late afternoon visit to the Istanbul's Turkish and Islamic Arts Museum.

This morning we visit the Spice Bazaar (Egyptian Bazaar) fragrant with the scents of the world. Embark on a ferry for our cruise of the Bosphorus Strait and visit Rumeli Fortress and Dolmabahce Palace, the last residence of Ottoman Sultans with 365 rooms and 22 saloons. Bosphorus Bridge gives you the chance to walk between continents, from Europe to Asia and Camlica Hill offers a gorgeous panoramic view of Istanbul and and the Bosphorus.

Morning flight to Cappadocia. Kapadokya is a remarkable region in Central Anatolia renowned for its fabulous natural rock formations which have been utilized for everything from homes to churches and even complete underground villages. The open air museum of Goreme consists of steep cliffs and churches dating from the second half of the 9th century and on hidden in the rock face. After lunch we will continue to Uchisar Fortress. This 60 meter-high fortress was carved out of a natural hill dominating the area with a breathtaking view of the surrounding Cappadocia landscapes.

Continue our explorations of Cappadocia at the remarkable underground city of Kaymaklı. Beginning in the second century AD, as successive armies swept across Asia Minor, the residents of Cappadocia created uniquely defensible communities by digging eight stories down into the volcanic tufa stone. On to Pasabag – a site of amazing natural beauty, where erosion has formed a magical landscape of "fairy chimneys" - perfect for photos and imagination!

Continue on to the town of Urgup to visit the Turasan Winery to sample some of the local wines. Cappadocia is one of the main wine production areas in Turkey, and Turasan winery (founded in 1943) is the biggest producer in the area. Afterwards we'll proceed to Avanos, a small town famous for pottery and carpets built along the banks of the Kizilirmak (Halys) River, the longest river completely within the borders of Turkey. Here we'll visit a pottery workshop and you can try your hand at this centuries-old Cappadocian craft. At a local carpet workshop learn about all aspects of this traditional Turkish craft, from silkworm cultivation, to spinning, dyeing and traditional patterns and weaving techniques.

Scenic drive to Pamukkale via Konya (ancient Iconium), one of the oldest cities in Anatolia. After lunch we'll visit Mevlana Tekke the tomb and shrine of Mevlana Celaleddin Rumi, founder of the Mevlevi Order of Whirling Dervishes. The most famous monument in Konya and the object of pilgrimages from all over the world, the tomb was converted into a museum after the Proclamation of the Republic. It houses personal items from Mevlana and other dervishes as well as valuable samples of hand-painted kerchiefs, handwriting, ornaments, wooden works of art, instruments for Mevlevi music, carpets and kilims. The most appealing section of the tomb is the Kubbe-i Hadra, domed with green tiles above the graves of Hz. Mevlana and his son Sultan Veledin. Built by Architect Bedreddin during the Seljuk Period in 1396, the inner walls of the tomb are embellished with plaster relief and the sarcophagus of Hz. Mevlana is a superior sample of wood craft of the period. Leaving Konya we'll continue to Pamukkale. Pamukkale (Hierapolis) has always been a very popular settlement. Its hot springs were believed to have healing powers and the city became the center of a pagan cult in antiquity and is a spa resort today. Enjoy the thermal waters at your hotel.

Sightseeing tour in Pamukkale. The ancient city of Hierapolis was founded by Pergamum in the 2C BC. For countless millennia a spring located on the plateau, possibly in the neighborhood of the ancient theatre, has been pouring out streams of hot mineral water. These have plunged down the mountain-side creating enormous circular basins fringed with stalactites and surrounded by smooth, dazzling white calcareous rock - hence the Turkish name Pamukkale or Cotton Castle. We will visit the site of Heiropolis and and the museum this morning. In the afternoon, depart for Bodrum on the coast, about a 3 hour drive. An impressive medieval castle built by the Knights of Rhodes guards the entrance to Bodrum's dazzling blue bay where the Aegean and the Mediterranean Seas meet. Bodrum has a reputation as the center of the Turkish art community with its lively Bohemian atmosphere and clusters of small galleries.

Our half day tour of Bodrum this morning includes the crusader Castle of St. Peter (or Petronium) which dominates the town on a promontory over the harbor. Bathed in surrealistic silver and gold floodlights at night, the Knights of St. John began construction on the castle in 1402. Explore the Bodrum Museum of Underwater Archeology is located inside the St. Peter Castle. Opened in 1960, the museum is recognized as one of the finest of its kind. After Bodrum we will drive about 2 ½ hours to Kusadasi. Kusadasi, which means "Bird Island" is set in a superb gulf and is known for its sparkling water, broad sandy beaches and bustling marina.

Full day sightseeing tour to the ruins of Ephesus, one of the world's best-preserved ancient cities. In Roman times, Ephesus was the provincial capital of Asia, with a population of some 250,000 at the height of its glory. The most significant relic of the site is the immense amphitheater that holds 24,000 people and is still used today. We will walk along the Sacred Way where the rich once lived and where an ingenious water and sewer system was constructed beneath paving stones of marble. The Temple of Hadrian is a Corinthian-style building with the head of Medusa on the porch to ward off evil spirits and the Library of Celsius once held 12,000 ancient scrolls stored in niches around the walls.

From here we will drive to Sirince village for lunch. This old Orthodox village was once named Cirkince ("ugly"). Indeed its habitants gave it this name on purpose so as not to be bothered by strangers. Still, visitors learned that the village was not ugly at all and called it Sirince ("pretty").

Today the village is a perfect synthesis of Turkish and Greek culture: typical Greek houses on the exterior reveal local influences in the interior. Some of the most beautiful ones are open to visitors. After lunch stroll through the village of narrow streets where the local women sell handicrafts of all kinds, local olive oil and home-made wine.

Our last visit will be to the House of the Virgin Mary. Officially declared a shrine by the Roman Catholic Church in 1896, it has since become a popular place of pilgrimage. The chapel is built on the foundation of the house where the Virgin Mary is believed to have lived. In the early evening we will return to Kusadasi for dinner and an evening at leisure.

Morning flight to Istanbul. Upon arrival, you will be met by our guide and driver and will be transferred to your hotel. The remainder of the day is at leisure to explore the rest of this fabulous city. You are within walking distance of the Grand Bazaar and many other places of interest.