Duration of this Trip 7 Days Priced From $3,128 per person 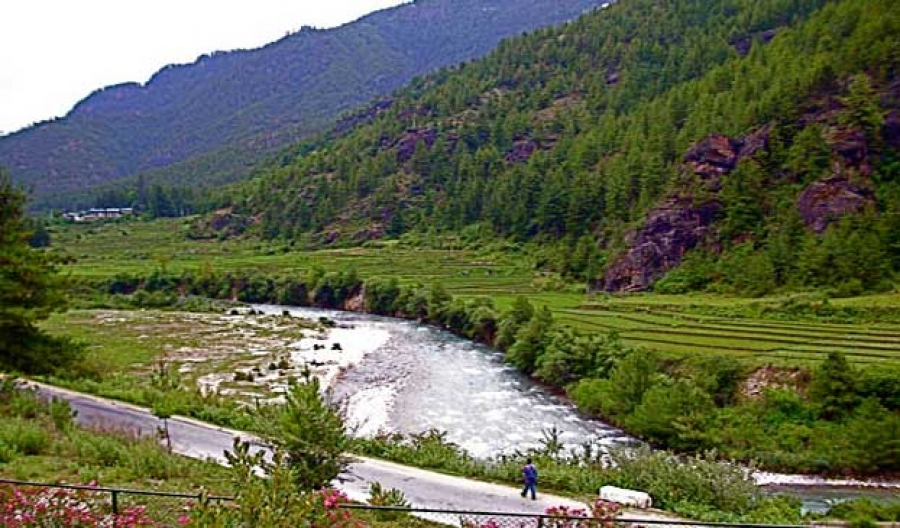 Surrounded in mystery like the clouds that shroud its peaks, Bhutan has always been a mystical destination – the last Shangri-la. Nestled in the heart of the Himalayas, stark and dramatic mountains form frontiers with Tibet and India, giving Bhutan a sense of peace and tranquility. Let yourself be swept away like the winds that snatch at the flags carrying prayers across the boundless vistas of Drukyul, the Land of the Thunder Dragon. Hike up a mountainside to soar with the eagles or rest in the spiritual calm of flickering temple candles. Revive your spirit in this fabled realm of peaceful villages, spinning prayer wheels, smiles, and kind words!

Paro International Airport is settled in a deep valley in western Bhutan and there will be spectacular views as you land! You'll be met by our representatives, then embark on a sightseeing drive to Punakha/Wangdiphodrang (3.5 hours). En-route we'll stop at Dochula Pass (3100 meters) where you will visit the Druk Wangyel Monastery and the 108 chortens or stupas commissioned by the Queen Mother. If the weather is clear, there will be wonderful views of the Eastern Himalayan Range including Gangkar Punseum (7590 meters), the highest mountain in Bhutan, and also the world's highest unscaled peak. Dinner will be at our hotel for the night.

Discover the Punakha valley! We will visit Chimmi Lhakang - the monastery of the Divine Madman and the fertility monastery. This is a great chance to see rural life. Follow by visit to Puankha Dzong, or Palace of Bliss. Set beside a river, its considered to be the most beautiful Dzong in the country. Punakha served as capital of Bhutan till the early 20th century. The Chief Abbot and about 1000 monks live here for six months in the winter since Punakha is located at a lower altitude than Thimphu. Follow up with a visit to Khamsum Yulley Chorten with its labyrinthine walls and golden spire, built to ward off negative forces and bring peace. A picnic lunch will be served. We'll head for dinner and overnight at Wangdiphodrang/Punakha.

while Bhutan is a small country, its landscapes offer significant beauty and meandering roadways. Today takes us to Thimphu, the capital of Bhutan, 2.5 hours away. Thimphu is Bhutan's largest city and offers a taste of the modern in this land of tradition. There's lots to see at a handmade paper factory, a traditional silversmiths and the Tashicho Dzong. Wander the main streets of Thimphu, check out the handicrafts stalls and if you're there on the weekend, the Centenary Market. Dinner at a Bhutanese home. Overnight.

After breakfast we'll continue sightseeing around Thimphu. Visit the School of Arts and Crafts, the National Library, and the Institute of Traditional Medicine. We'll enjoy lunch at a traditional restaurant. Visit the Zilukha Nunnery, the Mothithang Zoo which houses Takins, the national animal of Bhutan. Explore Changangkha Lhakang, a 12th c. monastery. In the evening, take a leisurely stroll from your hotel to the National Memorial Chorten, a shrine to the memory of the third King, Jigme Dorji Wangchuck. Recently renovated, many locals come here throughout the day to gain spiritual merit by walking around the Chorten. Dinner at the hoteland overnight in Thimphu.

The drive back to Paro is short but scenic. Once there, we'll visit the National Museum, housed in the TA DZONG (WATCH TOWER). Built in the early sixteenth century to protect Paro valley against Tibetan invasion, it was repurposed as a museum in 1968. Inside is an rich collection of art and artifacts from all over Bhutan showcasing its history and culture. Paro Dzong which was built in 1646 by the first theocracy ruler Shabdrung Ngawang Namgyel is considered the finest example of Bhutanese architecture. It is on a steep hillside above the National Museum. Overnight in Paro.

The iconic Tiger's Nest Monastery (Taktsang) is the most famous of the kingdom's more than two thousands monasteries. It's perched on the side of a cliff more than 2,000 feet above Paro valley. Guru Rimpoche, the founder of Buddhism in Bhutan was said to have flown to the cave on the back of a tigress for meditation. This site is considered sacred by Mahayana Buddhists and a highlight of any visit to Bhutan. Overnight stay in Paro.