Hidden amidst the Caucasus Mountains, discover three ancient cultures emerging in newfound glory after Soviet rule. Azerbaijan in the West borders the great Caspian Sea, and features unforgettable Islamic and Zoroastrian architecture. In the East Georgia lies next to the Black Sea, between mountains and forests. To the South is Armenia, a landlocked country that offers breathtaking views and bustling cities. Journey to a part of the world that spans continents, religions and history – travel to the Caucasus!

Let Azerbaijan, the "Guardian of the Fires," enflame your passion for Caucasus travel. One of the lands of the ancient Zoroastrians, northwest Azerbaijan lies at the foot of snowcapped mountains which beckon you to trek up to their distant peaks. Baku is a golden city on the sparkling Caspian Sea. Look out across centuries of history as you explore Atashgah, a fire temple from the 1600s or savor fine Azeri wine and caviar on your way to the majestic Shirvansha Palace Complex. Move southwest, weaving through the Talish Mountains along the Lankoran River. Other destinations in Azerbaijan are just a train ride away, allowing you to step into living history and enjoy the distinctive flair of its diverse regions.

In Georgia follow in the footsteps of Jason and the Argonauts where they pursued the Golden Fleece. It's no wonder that this land of mountain and sea made its way into legend, for it is truly a land of beauty and wonder. Tbilisi is the historic capital of Georgia and the largest city in the country. A main cultural, industrial and social center, Tbilisi typifies the blend of cultures seen across the country, with a mix of architectural styles, museums, and inhabitants. Discover Mtskheta with its UNESCO World Heritage sites of medieval cathedrals, monasteries, and fortresses. Visit the city's ruins, testaments to Roman occupation dating back to the 3rd century BC. The Kakheti region to the east produces Georgia's famous wine grapes. Take the time to delight in wine-tasting events and join in the local drinking songs!

Travel to the fabled country of Armenia, which intertwines Greek, Roman, Byzantine, Arab, Mongol, Persian and Russian cultures in a fabulous blend of traditions. Yerevan, the capital of Armenia, is one of the world's oldest continually inhabited cities. Today, Yerevan is the cultural, industrial and administrative center of the country and sports modern shops, restaurants and attractions. Outside of the capital, Armenia offers travelers a wealth of activities. Climb Mt. Aragats, an extinct volcano not far from Yerevan with treks for amateurs and experienced outdoorsmen alike, or hike the trails around Lake Sevan and the Tatev Monastery in Zangezour. Armenia's continental climate provides an inviting atmosphere for visitors who want to spend time outdoors: summers are sunny and hot, but dry with cool evening breezes from the mountains.
Possibly the most visited city by both pilgrims and tourists, Echmiadzin in eastern Armenia is said to be the holiest city in the country. It is the seat of the head of the Armenian Apostolic Church, one of the oldest Christian communities in the world. Armenia's rich history, incredible scenery, continental climate and modern amenities make it an unforgettable experience for travelers.

The Caucasus promises to satisfy any traveler – a breath of pristine mountain air, the lap of warm sea waters on a sandy beach, unrivalled history and a mix of enchanting cultures invites you to explore this pillar of the mythological world and bridge between two continents.

The Golden Road to Samarkand! Welcome to Uzbekistan - the crossroads of civilization and the heart of Central Asia. Experience 3000 years of history, from the earliest settlements to the eras...

Treasures of The Caucasus

Easter in Armenia – The Cradle of Christ... 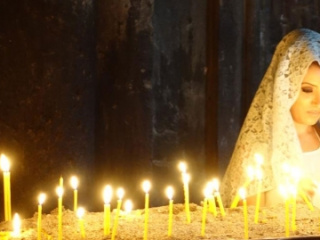 Easter or “Zatik” in Armenia is one of the most colorful, joyful celebrations of the year. With traditions dating back thousands of years, visitors are invited to church ceremonies, to...