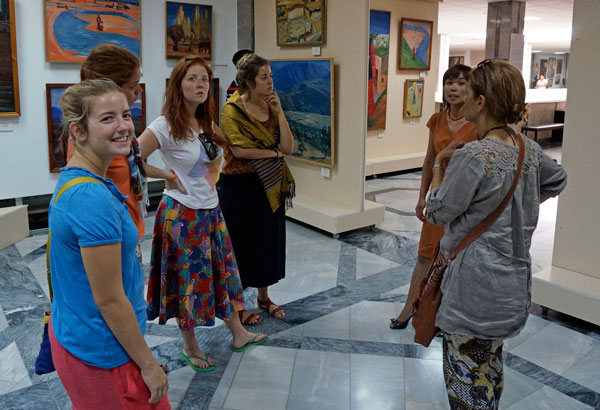 Who would have thought ten years ago that tourists would be clamoring to travel to Karakalpakstan? It's true; these days more and more people are making it a point to include Nukus, the home of the Savitsky museum, into their Central Asian tour.

There they can see two extraordinary and different collections; both are the life's work of one man, who turned an artist's eye an everything he saw. The first collection is comprised of ancient and folk treasures. As a young man and painter Savitsky (born in Russia) worked on the historic archeological dig at Khorezm, and it was there that he fell in love with the culture and light of Karakalpakstan. Although he was a talented painter, his teacher so discouraged him that he turned instead, to collecting and preserving what he encountered around him. He unearthed artifacts, and more dramatically, he found wondrous jewelry and textiles that were not valued by the Karakalpaks, whose culture had been subverted by the Soviets. Savitsky was instrumental in preserving this heritage. The second collection is comprised of paintings from the Stalinist era, some by local painters, some by Russians. All these works were banned in their day as "subversive" as they were not state-approved Social Realism. But through Savitsky's perseverance (and the fact that Nukus was an isolated backwater) a world-class collection of what came to be known as Russian Avant-Garde came into being. It is now formally acknowledged that the Nukus Museum is among the great museums of the world. Tragically, Savitsky died from overexposure to chemicals he used in his restoration work. His story, told in the excellent documentary "The Desert of Forbidden Art" (a hit worldwide) drew global attention to this hidden treasure of a museum. As a result Nukus has seen some development, with the addition of more local hotels to accommodate tourists, and a music center in 2012. The museum itself is now housed in an impressive new building that reflects its cultural importance.

Tweet
The archeological jewels, nomadic life and spectac...
The Beauty of Uzbek Textiles and Embroidery

No comments made yet. Be the first to submit a comment