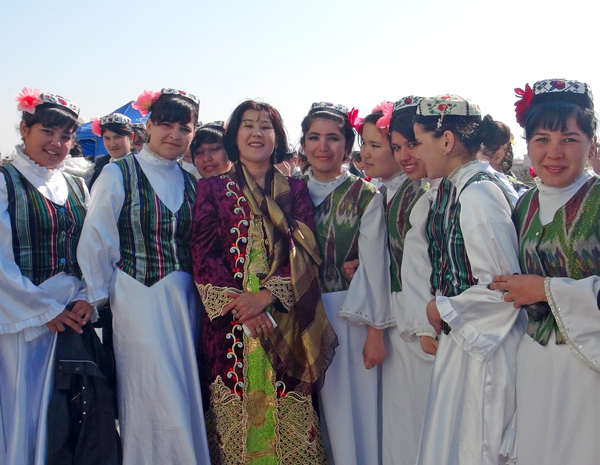 Central Asia was the center of the Silk Road throughout the centuries and different religions have been existed there. Different holidays and festivities were celebrated by its population who has different nationalities. One of the popular winter holidays is the New Year. People buy and decorate their New Year trees and invite their extended families over for a large feast. This is celebrated at schools and kindergartens as well. Many Christians celebrate also Christmas with their extended families and give gifts to each other. However In Central Asia the traditional New Year begins with Navruz (New Day, New Day of the New Year), the ancient commemoration of the coming of spring that has been celebrated for more than 2,500 years. With roots in pagan times and many of its traditions associated with the Zoroastrian religion of ancient Persia, it is a holiday celebrating how light and warmth win out over the cold and darkness of winter. The celebration begins on the 21st of March, but preparations begin several days beforehand: the villages and homes are cleaned and decorated, old and broken items are discarded, and people get new clothes for the holiday. And not only the homes are cleaned - this is also a time for tidying up one's life, forgiving past offenses and debts, renewing friendships, and establishing an atmosphere of harmony and plenty that will hopefully last throughout the year. Entire town and villages prepare for this festival, cooking dishes exclusive to this season – the tables full to bursting!
Christmas and New Year tours to Central Asia is becoming very popular among our American travelers who would like to meet the new year in Legendary Silk Road Cities of Central Asia or skiing on New Year's day in spectacular Tiyanshan mountains. The travelers are given exotic traditional gifts during the holidays, enjoy the folk and sport shows in the stadiums, taste local cuisine in the streets and most importantly celebrate the festivities with locals.

Planning to Travel the Silk Road in 2014?
Updated Visa procedure to Central Asia and Caucasu...